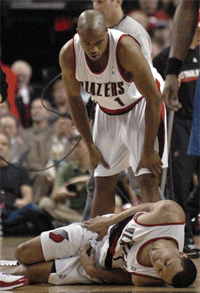 Roy was hurt at the end of the first quarter in Portland's win over Washington. The All-Star guard strained his right groin attempting to block Caron Butler's buzzer-beating attempt. He returned briefly in the second quarter, but he aggravated the injury and soon left for good. Afterward, Blazers coach Nate McMillan told The Oregonian: "That injury could be awhile." The paper pointed out that groin injuries can take a month to heal.

With that, set your coffee safely away from your keyboard, and let me say it: Roy's season might be over.

As for Turkoglu, he fell on his right wrist during Orlando's loss to San Antonio. As with Roy, Turkoglu's injury occurred at the end of the first quarter, and, after trying to play with it, he left for good early in the second. Turkoglu, a fantasy gem uncovered at the tail end of many drafts this season, will have an MRI on Wednesday.

"I'm crossing my fingers," he told the Orlando Sentinel. "I just fell on it. I hope it's just a sprain. I hope it's not something like it was broken and keeps me away."

There's still a little snow on our lawn. The flowers haven't poked through the ground yet. And the only real baseball game was played in a Japanese egg. Fret not, though. Clearly, spring is here.