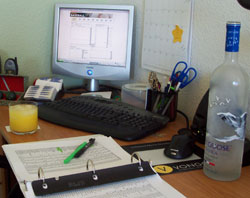 With a bottle of Grey Goose at my side, I sat down for another fantasy baseball draft, fully prepared to let my drafting policies follow my sobriety. The 2006 version of the annual meeting of NECBL2 owners had all the major surprises one would expect from an honest to god competitive fantasy league, not the least of which was that there were n'an surprises in the first five rounds. Still, I went to sleep last night, woke up this morning, and Adler still drafted Andy Pettitte and Roger Clemens. I'll break the draft down in the following sections...

For once, the keeper rounds went smoothly. It turns out that Stanley wasn't kidding when he said he was keeping Chone Figgins and I was kidding when I said I was keeping Jonny Gomes. I love how the draft starts and it's hard to keep up with the chat line, then as the final round of the re-draft starts people start to disappear a little bit. I'll admit I was scrambling up until the first pick... but we're not there yet.

The rounds following the keeper rounds saw many familiar faces walk across the stage. Some players shook hands with familiar owners, while others are going to try on new team colors in 2006. Carlos Beltran openly wept as he was drafted #1 overall by Steve Adler's Tiger Army, officially ending his chances of ever making the playoffs. Yahoo!'s rankings and draft guesstimates were completely thrown out the window by NECBL2 owners, which I love. Here are some examples of why our league is awesome: Bonds and Sizemore going in Round 6, Jeff Kent going to New Haven, and Watts essentially drafting the same guy twice (Brian Giles & J.D. Drew). Funston be damned, I say!

Is it just me, or are rounds 11 through 15 a pretty good representation of years 13 through 18 in life? It seems like some of us don't know what we're doing, we wind up making bad decisions, and we try to hang-out with "the cool kids" even though they'll be working at K-Mart in 5 years. What the hell was up with these picks? Round 11, Livan Herandez. Round 12, Cliff Floyd. Round 13, Jeremy Hermida, Jason Giambi, and Randy Winn. Round 14, Trevor Hoffman and Julio Lugo. Round 15, Placido Polanco and Eddie Guardado. And I've already stated that I'm refusing to believe that Adler took Andy Pettitte even though he tried to hide it by taking Jason Varitek 2 seconds later. I'm not saying those were all bad picks, mind you, but I know I hate looking at my cheat sheet and saying to myself "damn, I have to draft Livan Hernandez, don't I? This sucks."

Like Adler at a bar at 2am, most owners seem to loosen their standards as to who they are willing to take chances on as the evening progresses. Rookies and old-timers alike were given chances to play in the big show and owners around the league thanked Stanley for only pre-ranking 125 players. There was a good mix of age in almost every round of this group, and I commend owners around the league for making some shrewd picks. There was a rookie or a second-year player drafted in every round as well as veterans with upside such as Roger Clemens, Jim Thome, Armando Benitez, Javy Lopez (who was later cut, for some reason), Torii Hunter, and Pudge Rodriguez.

Rounds 21 through 25 are a lot like rounds 16 through 20, except they're not as good and the last one doesn't count. Frieds drafted a guy who in currently in AAA, Rich drafted Rocco Baldelli, and I hit that Bong... hahahahahahahahahahahah!