For giving me yet another reason to be thankful that I'm not one of you.
Posted by Anonymous at 10:23 AM No comments:

The Speedway Starwipes and Chicago Tiger Army have completed a historic deal in which each team will agree to hang on to the players they should and not really bother so much with the trading and the swapping and the whatnot.

Per the terms of the deal, Speedway will keep Jake Peavy and Magglio Ordonez, who will be very good in 2008 and dump Troy Tulowitzki and Mark Teixiera, who will most likely suck in April.

In exchange, Chicago has agreed to retain Manny Ramirez and Felix Hernandez and not pay any attention to Hunter Pence. He will undoubtedly blow.

Elsewhere around the league, Conor Jackson and Brian Bannister were scouted by nobody during Spring Training action today.
Posted by Ryan at 11:34 AM No comments:

Starwipes 343 / Traffic Cones 403.5
Recap: GMs around the league are still waiting for Carlos Pena and Eric Byrnes to revert back to their 2006 selves. Unfortunately for the Speedway Starwipes, that hasn't happened yet. Pena and Byrnes put up a combined 73 points and helped the Cones roll the Wipes. The loss dropped Frieds' squad to 8-10 on the year. Frieds' Wipes are near the bottom of the league in scoring, but he expects the entire roster to pick it up or be cut for 19 year-olds in the coming weeks. As for New Haven, they continue to mash bumping their league-leading hitting average to 269 points-per-week.
Looking Ahead: Coming off his first victory of the season, Ffej is looking to continue his winning ways against Week 1's high-scorers, the Marshall Street Menace. Coming off his first loss of the season, Frieds' is looking to halt his losing ways against the overall high-scorers, the Mile High Mackerel.

Squatters 351.3 / Devil Jays 442.8
Recap: "We refuse/accept to be in last place!" was the chant heard outside the Squats/D-Jays game in Week 2. Baltimore whacked L.A. of A to the tune of a 91.5 point margin and a 7-2 victory. To boot, the D-Jays took home Team O' The Week honors edging the Mackerel by less than 3 points. It was a well-rounded effort from the Devil Jays who were led by Pat Burrell (37 points) and Brian Bannister (53.5). A frightening thought for the rest of the league is that Prince Fielder still has as many home runs in 2008 as Barry Bonds. The Squatters are reeling, having won only 5 games in the first two weeks. They need to get more production out of the likes of Robinson Cano, Magglio Ordonez, and Russell Martin if they are to compete in the coming weeks.
Looking Ahead: Grashow's Jays take their high scorers banner to Woosta this week, where they already have a few of those. What Woosta also has in a struggling Big Papi and a few two-start pitchers who are already on their way to the guillotine. Bob looks for a W in Chicago this week, but Adler will probably be having none of that.

Menace 281.2 / Mackerel 440
Recap: Ouch.
Looking Ahead: I'm not sure about much in life, but I'm pretty sure my boyz-in-teal (and my fantasy managerial prowess) peaked in Week 2 of the season. That being said, and with Joe Borowski already guaranteed negative points in Week 3, I don't like my chances against Frieds. Watts and His Travelling Band of Catchers take on Ffej and His Merry Closers in a Week 3 match up that could prove to be a turning point for both teams.

League MVP - Jason Isringhausen of the New Haven Traffic Cones
Yeah, a closer. Look at the numbers. This guys is producing amazing stats and has helped Jeff lock up the 2 seed. Could this finally be the year (and sport?) that Jeff breaks through and wins that elusive KFS title?

Draft Steal - Raul Ibanez of the Marshall St Menace
Yep, Mr Irrelevant. Has 3 HR's and 7 RBI's in the last three days. This is the kind of pick that Watts is banking on to turn his franchise around... which is exactly why he now plays for Woosta.

Best Pickup - Evan Longoria of the Baltimore Devil Rays
I've been reading articles and apparently Baltimore's conquest is now assured. Most of these articles are guaranteeing that whoever has Longoria is a lock to win this year. I don't know about the rest of you, but I'm not gonna waste my time on a league that somebody has already won. Grashow was so proud of this move that he has done it twice this year.

Draft Bust - Russell Martin of the Speedway Starwipes
Luckily GM Friedman forsaw the amazing levels of suckitude that await the owner of Russell Martin this year and has quickly fixed his mistake by trading him for the privelege of having Scott Kazmir take up one of his DL spots.

Worst Keeper - David Ortiz of the Woosta Pimp Roostas
Hard to understand what GM Rich Gallup was thinking in keeping Big Papi. His Mo Vaughn-esque physique has CLEARLY caught up with him and Rich will be lucky to get any production from this spot.

Rookie of the Year - Geovany Soto of the Woosta Pimp Roostas
How good is Mr. Soto? Well, to this point GM Rich Gallup has had only ONE catcher. Yeah that's right.

Package Series MVP - Evan Longoria of the Baltimore Devil Jays
As I said, I have read many articles and this is what experts are saying. Who am I to argue with experts? E-X-P-E-R-T-S!!!
Posted by theoadler at 7:04 PM No comments:

Apr 14 RHP Joe Borowski's 47 career saves with the Indians ranks seventh on
the club's all-time list, one behind Steve Olin.

... he needs just two more saves to pull a HEAD of Olin.
Posted by Anonymous at 4:45 PM No comments:

A new column that all are welcome to add to... Basically an attempt to get anyone to bite on a player that your mouse hovers on daily.

As of today Matthews is the third highest scoring available position player behind Christian Guzman and Scott Hairston who aren't as tall as I am when one of them is standing on the other's shoulders (Yahoo says they're both 6-0, that's a load of crap). Matthews is hitting between Chone Figgins and Vlad Guerrero in the Angels lineup which means he should see a lot of RBI and run scoring opportunities. And let us not forget his 'roid enhanced 2006 campaign in which he scored 556 ECB points. Somebody add this clown.

Posted by Anonymous at 7:54 PM No comments: 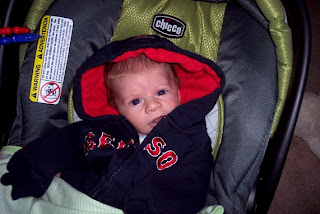 I promise not to do this too often but today's a holiday, right?
Posted by Ryan at 3:08 PM 1 comment: Some quick hits about the week that was in ECB...
Squatters 345 / Mackerel 396.7
Recap: Mile High took it's opening series thanks mostly to heroic pitching efforts from Roy Halladay and Ben Sheets on Sunday afternoon. Going into the day, it looked like the Mackerel were in trouble, but the Fish put up 130 points which gave them the second highest score of the week. Mile High was helped by a poor hitting performance by L.A., the only team in the league to finish the week without scoring 200 points.
Looking Ahead: I get to eat crow or rub it in after Week 2 as my Mackerel take their 7-week regular-season win streak against Week 1's highest scoring team, the surprising (at least to me) Marshall St. Menace. Bob moves on to play Baltimore in an early season battle for last place.
Starwipes 375.7 / Tiger Army 368.7
Recap: The Curse Of Mark Teixeira will have to wait a few more weeks to wreak havoc on the Starwipes as they were able to take the opening series from the team with which they caused so much quasi-controversy before the season began. Led by Hitter O' The Week Chase Utley (39 points), the Wipes' hitters were able to carry the load as the pitching staff put up a less-than-impressive 118.2 points. Adler's Army has yet to get going with the sticks as they finished ahead of only L.A. in offensive points.
Looking Ahead: Frieds will look to build on his opening win when his squad takes on Ffej's Traffic Cones. It could turn out to be a slug-fest as Speedway and New Haven finished 1-2 in offensive points in Week 1. Adler will look to turn things around against the team he loves to hate, Woosta.
Traffic Cones 364.2 / Pimp Roostas 383.7
Recap: Ffej's T-Cones kept it just close enough against the Pimp Roostas to hold Rich's squad to a 5-4 victory. The Roostas didn't wow offensively, but got the job done on the bump as they put up the third highest pitching total of the week which more than made up for the 29 points they were outscored offensively. Still, once the struggles of David Ortiz and Manny Ramirez dissipate, this team should have no problems scoring points on the offensive end. Chad Cordero and Erik Bedard having health issues could have been the difference in this series for Ffej, so this 4-5 loss could be chalked up to bad luck depending on how much you like Rich's team.
Looking Ahead: Round 1 of The Battle For Who Loves The Red Sox More takes place in Week 2 as Rich's Roostas take on Adler's Army. An early peek shows that Rich will probably have 4 2-start pitchers against only 2 for Adler... We'll see if quantity wins over quality a week from now. The T-Cones take on Frieds' Baby Wipes in a match-up that's got NASCAR references written all over it for next week's recap.
Devil Jays 347.2 / Menace 404.3
Recap: In the surprise of the week (did I already say that?), Watts' Menace hung an Atlanta area code on Grashow's Devil Jays (DosBot is dead). Looking ahead to Week 2, Jake Peavy peed on Ben Sheets' 56.2 points by dropping 63.5 points of his own and taking home the Pitcher O' The Week award. If Week 1 is any indication, Watts' pitching will be the strongest part of his team. The Devil Jays got the worst of the Week 1 DL bug as they had to put J.J. Putz and Pedro Martinez on the shelf, but they had to be encouraged by the numbers put up by Rick Ankiel, Alex Rios, and Justin Upton (32, 28, and 25 points respectively).
Looking Ahead: As previously stated, Watts and I are going toe-to-toe in Week 2 in the second installment of the Who's The Better Jon Series; Watts has the early lead by taking out Grashow, but Class of '98 has not yet begun to fight. Grashow's squad looks to rebound against the Squatters who also took a tough Week 1 loss against the Mackerel.
Posted by Anonymous at 12:44 PM No comments:

This little blurb and accompanying photo come to us from Monday's Keene Sentinel - your one-stop shop for over-the-top Blackbird pride, recognizable names in the police report, and the latest in any and all news related to Chinese modes of transportation.

Rich Rice, of Keene, riding in back, gets peddled around town by his son Justin on Saturday as Rich tries out the homemade "rickshaw" he bought from a friend. He hopes to offer rides to pedestrians along Keene's bike path starting soon he said. He won't charge in the beginning but sees it as a potential source of income if there is interest.

A. That looks like Chabot circa 1999.
B. Rich Rice plays on the wing for the NHL '95 Bruins, or enters battle royales in WCW-NWO Revenge. He does not pull probable Athens Pizza employees around the Elm City in a damn carriage.
C. What the fuck do I have to do to win a fantasy basketball title?

Wait, what were we talking about?